Time To Do Something

It's been quite along time since I've been on here.  As this blog is a leisure activity to me and leisure time as been limited in the last nine months due to teaching, the blog gets to wait until summer. Although it's not quite summer for me as I have one more week of school left, the events today in Orlando, Florida have prompted me to write.

I'm done with my own inaction regarding events like today.  I'm done with putting up a solidarity photo on Facebook (which I never do), or a post telling "friends" that I hate what has happened (I don't do those either).  What I usually do is listen and read voraciously about the event (s) and perhaps talk about it briefly, barely skimming the surface of the bigger issues with others and then, do nothing.
Absolutely nothing.

50 people died today.  50 humans that were likely only at the Pulse Nightclub for two reasons: either they were working or there were there to enjoy themselves.  Think of the potential that each of those 50 lives had for the rest of their lives? As of now, the list of who died only consists of seven of the fifty, but my soul aches for the family members of every one of them.  I have two sons and the thought of being on the other end of a phone call, telling me that my son had been killed at either his place of work or when he was out having fun, horrifies me.

He killed 50 people.
He ended 50 lives and permanently affected hundreds perhaps thousands of lives as a result of his act.
In 1984, there was a mass shooting at a McDonald's in San Ysidro, California.  My best friends had moved to an area close to there a few years before and we were in continual touch by phone.  When I learned that their father drove past that McDonald's every day on his commute to work and sometimes stopped in there, I was scared.  My friends shared with me via phone, all of the details of the victims and the shooter, etc.  In my fifteen years of life, I had never been made aware of anything like this happening, anywhere.  I remember wanting to know the reason why someone would do such a horrible act.


This list is only the largest of the mass shootings in the United States and today is grew again.  As of today, 672 people have been killed in Los Angeles County in the last 12 months.  How many thousands of lives have been permanently affected by those killings?

I'm a new teacher and I remember in the beginning of the school year when a student directly asked me how I would protect them if a "crazy guy" decided to come into our school and kill people.  His question scared the heck out of me.  I searched out the police officer who is routinely on patrol on our campus and asked what I could do in this situation.  He directed me to watch an "Active Shooter" video as that would be the best way I could protect my students.  I did watch it and have watched it a few times since September so I don't forget the instructions.

But is that the only thing I can do? React with knowledge (via the Active Shooter video) to events if they happen to me?
Today that is no longer good enough.

As of right now I am not sure how I am going to act, but today I start with this.
It is time for me to do something.

Happy Saturday everyone,
My family and I attended the 2016 Rose Parade in Pasadena, CA yesterday and we had a great time.  I have photos to show you regarding the parade which are a mix of my favorites plus some behind the scenes photos which you don't see on TV. 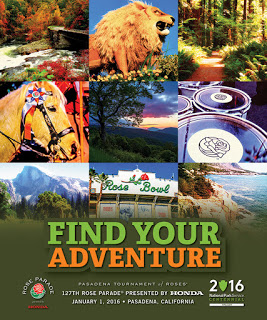 We leave our house at about 8am and by the time we pick up breakfast, find a spot to park, walk to the parade route and set up our seats, it's usually around 9am.  Not bad at all for the adults, not so fun for the teenagers whom would rather be asleep at 9am.  But hey, the choose to come with us! 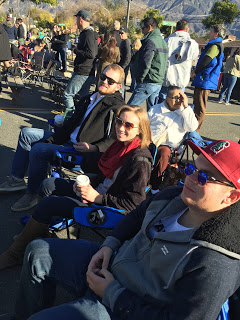 Wondering who those three are?  Older son at the top (19 year old with a full beard), his girlfriend in the center and younger son (17) in the bottom.  Younger son is half asleep and would be for another hour or so.

So the parade begins at 8am and as the route is 5 1/2 miles long, it takes them roughly 2 1/2 hours to walk the route.  A vast majority of the TV coverage is from the first 1/2 mile of the parade.  What is most impressive is that by the time the participants get to us (we are very close to the end), they are still excited and putting on a show for the thousands of people lining the entire route.

Things you don't see on TV:  floats break down, horses poop, marching bands stop to perform routines, TV breaks, taller floats have to lower portions of their floats to accommodate going under the 210 Foothill Freeway as they make the turn up Sierra Madre Boulevard to finish at the Post Parade Viewing area.

So let's begin the highlights by showing you what you may not of seen on TV.
Sky writers.
For an hour....
The same four phrases over and over for an hour were displayed in the blue skies above us. At first we thought it was funny but after a while, I'm pretty sure everyone was annoyed as it took our attention away from what we were there to see: the Rose Parade. 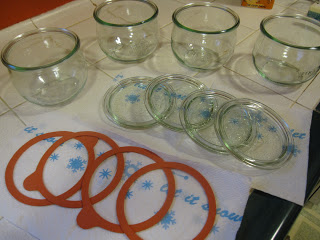 On to the parade...again these are my highlights that you likely didn't see on TV.

This camel was a part of the Donate Life float, which is an organization that raises awareness about being a Donor.  Did you know that floats play music?  This was one playing "What A Wonderful World" by Louis Armstrong.  No matter where I hear that song, it makes me happy.  All of the people on the float are individuals whom are organ donor recipients and I believe they were holding photographs of donors.  Heartwarming.
I like the back of floats. I love the creativity that people put in to a part that might seem an afterthought.  Isn't this billygoat hanging on a coal train cart adorable? 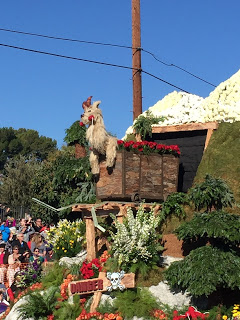 Ready for the final season of Downton Abbey?  I sure am and was thrilled not only to see Elizabeth McGovern who plays Cora, on the float, but to see the amazing detail of the castle as they sped on by.  Sometimes the floats go way to quick! 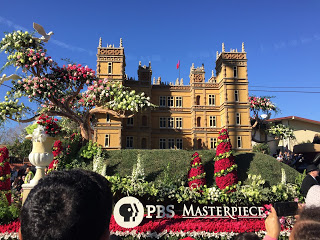 The California mission architecture on the Miracle Gro float was very pleasing.
Yep, I like buffalo and couldn't resist a shot of this one. 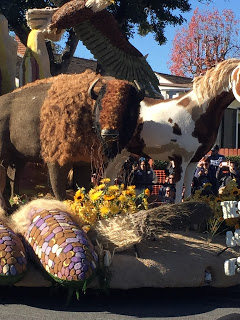 Biggest crowd pleaser award goes to the Disney float as it was three floats in one - the back portion contained various Star Wars characters.   I've seen many different versions of the Millennium Falcons, but never a float Millennium Falcon.  It was pretty cool. 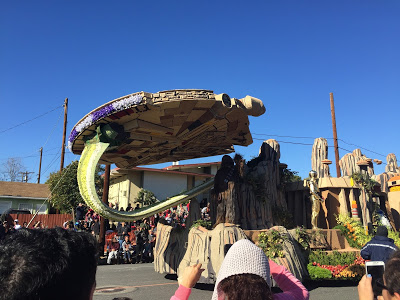 The Trader Joe's float is always very creative.  What caught my eye this year were the biggest balloons I've ever seen and the multiple bottles of two-buck chuck. 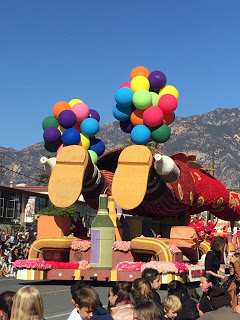 Wonder what is going on behind us while we are watching the parade? There a multitudes of these little carts selling corn and bacon wrapped hot dogs. 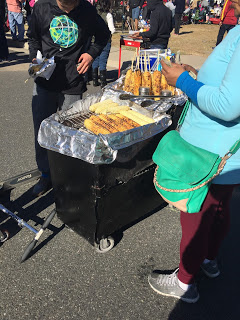 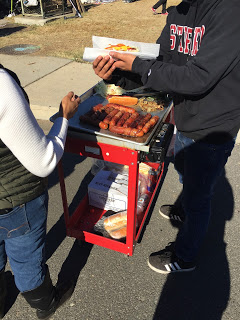 This dragon was incredibly fierce and beautiful! He was a part of the Marco Polo East Meets West float by Sinapoli Group. 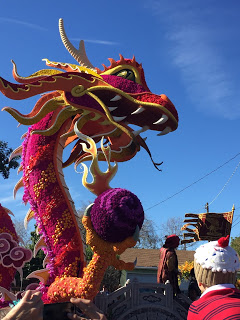 So I mentioned that floats break down and that causes the parade to have breaks, sometimes very long breaks.  So after a while, we participants decide to get out into the route and have a little fun.  My older son wanted a photo of him and his girlfriend during one of those breaks. 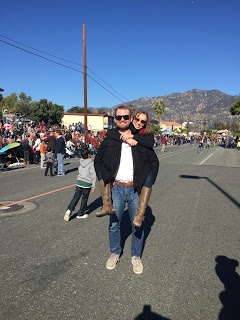 For more photos go check out Twitter as I posted photos as they parade went past.  I love going to watch the Rose Parade.  Next year we are considering buying tickets for the stands along Colorado Boulevard but that would require a 6am departure from my house - not sure if my teenagers will be up for that!
Enjoy the rest of your weekend,
Susan