I love mosaics and because I have nothing crafty I am working on related to Halloween right now I thought I would show you a Halloween costume mosaic of some of my past work: 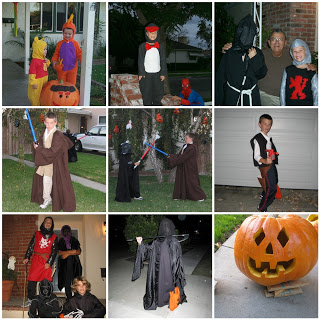 I had a wonderful time making all of these costumes for my boys - many have now been handed down to my young nephews which makes me very happy.  Many were borrowed for parties, plays etc., which was also super fun for me.  This year I had no requests for a costume although I was asked yesterday at about 4pm to make an "executioner's" mask.  What is it with boys?  With no black fabric in the house I had my son look through his clothes to see if he had a black t-shirt that was too small - about 30 minutes later he was a happy boy with his recycled "executioner's" mask.

Check out the video of the Stick Man costume that was in photo #7.  That was a great costume that took a lot of work but was so worth the outcome.