Snapshot of a Weekend

A lot of this: 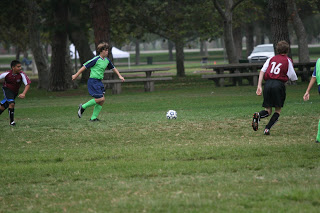 A little of this: Not enough of this: A (tiny) Quilt Finish and a Soccer Surprise

I finished a quilting project!  I used the first four Summer Sampler Series blocks to make myself a 24" square table topper and I just love it.  As I have not attempted free motion quilting yet, I quilted it by following the straight and diagonal lines that appear in each block.  Hand sewing the binding on reminded me how much I love doing it...got to get more of my quilt tops finished up so I can work on the bindings.
The majority of the weekend was spent on the soccer field watching my older son play in a tournament and this tournament was notable for two reasons:

They won, which is not unusual but comes after a tough last minute loss in a tournament final two weeks ago but more importantly goalkeeper son played on the field!  For most of his soccer playing life I have been used to seeing at at the end of the field wearing this:
But due to an usual set of circumstances where the team only had 13 players for their first game on Saturday, my son was on the bench suited up as a field player.  (His team has two goalkeepers and they switch off games.)   I am a cool customer when he is in the goal - I don't worry about him getting hurt or making mistakes which cause goals as I played goalkeeper myself in my younger days.  In the second half I looked over at the bench and saw my son jump up and stand next to the coach - and suddenly a sub was called and he went in as a forward.

OK, now I was freaking out.  I was now pacing the sidelines and many of my fellow parents were cracking up at me.

He played great and actually almost scored a goal which caused our entire sideline (our boys are fortunate to have a huge cheering section for every game)  to roar with excitement.  He loved his five minutes of fame on the field and the best part is was that he was smiling the entire time:
I'm linking up to {Sew} Modern Monday with Megan so go check out the other lovely modern quilting projects are listed.